The deputy commissioner of Cachar named Rohan Jha, found irregularities in the manner the exam was being conducted in the college.

Upon receiving the information of the same, the deputy commissioner summoned Dr. Nath, the College’s principal and in charge of the Center. Later, after noticing that the exam duties were not carried out in accordance with the directions, the DC filed an FIR. Soon after that the Cachar Police nabbed Nath and interrogated at the Silchar Sadar Police Station. The police later sent him to a hospital for a routine medical check-up.

The Assam Government is holding state-wide recruitment examinations to fill nearly 30,000 Grade III and IV posts in various government departments. In a bid to ensure the examination is conducted in all fairness, the state government has left no stone unturned. The government has also imposed Section 144 within a radius of 100 metres around the examination centres and mobile internet was too disabled during exam hours. 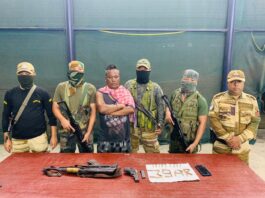 ASSAM RIFLES APPREHENDED ONE ACTIVE CADRE OF UTLA ALONG WITH ONE...