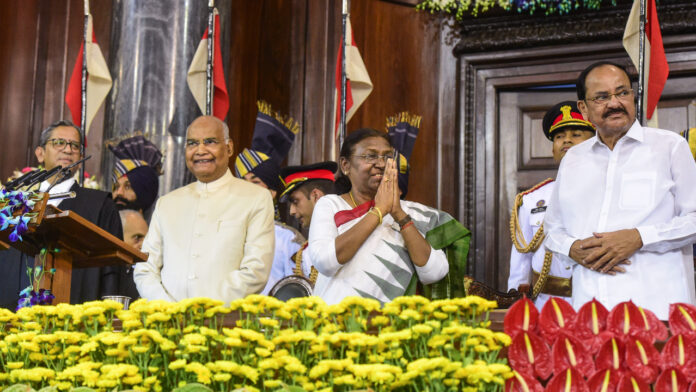 Droupadi Murmu, who took oath on Monday as India’s first president from a marginalised tribal community, said her victory is an example that the poor can also fulfil their dreams.

The 64-year-old former teacher from the eastern Indian state of Odisha won the presidential election with a big margin on Thursday and was sworn in an elaborate ceremony attended by prime minister Narendra Modi and several other top leaders.

“Reaching the Presidential post is not my personal achievement, it is the achievement of every poor person in India,” Ms. Murmu, wearing traditional attire, said in her speech.

“My election is proof that the poor in India can not just dream but also fulfil those dreams.”

In voting by members of both the houses of parliament and of the legislative assemblies of all the states, Ms. Murmu won by securing 64 percent votes against her opponent Yashwant Sinha’s 36 per cent.

Her elevation to India’s highest constitutional post has been perceived as an important and historic gesture of goodwill by Mr. Modi’s ruling right-wing Hindu nationalist Bharatiya Janata Party that nominated her for the post.

Her appointment marks a significant step for the representation of India’s tribal communities that make up more than 8 percent of its 1.4 billion people.

Ms. Murmu, who as a girl did not have sufficient money for her education, also invoked her background in her powerful speech.

“My election has the blessings of the poor of the country and reflects the dreams and capabilities of crores of women and daughters of the country.”

She promised she would hold the interests of the youth and women paramount in her five-year tenure.

Mr. Modi hailed Ms. Murmu’s swearing-in as a “watershed moment for India, especially for the poor, marginalised and downtrodden”.

Though a ceremonial role, the president acts as the Supreme Commander of the Armed Forces.

The president also plays an important role during political crises, such as when a general election is inconclusive, by deciding which party is in the best position to form a government.

On the conclusion of the ceremony in the hall of the parliament, Ms. Murmu left for the Presidential palace where she was greeted with an inter-services guard of honour and a 21-gun salute.

Ms. Murmu has been congratulated by world leaders, including China’s president Xi Jinping.

He said China and India are important neighbours to each other and “a healthy and stable China-India relationship serves the fundamental interests of the two countries and peoples, and is also conducive to regional and world peace, stability and development”.

“We attach much importance to the relations of a special privileged strategic partnership with India,” Mr Putin said in the message on Saturday.

“I hope your activities as the head of state will promote the further development of the Russian-Indian political dialogue and productive cooperation in different areas for the benefit of our friendly nations and in the interests of stronger international stability and security.”