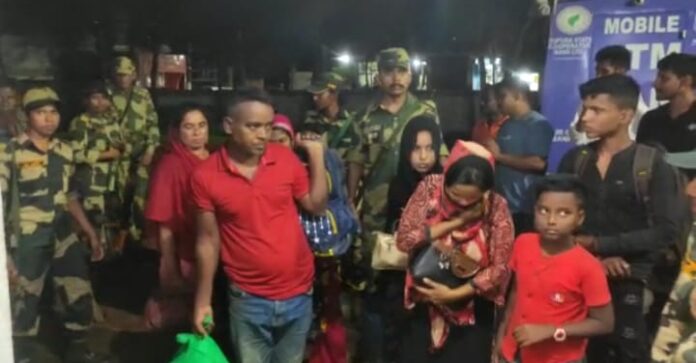 In the South Tripura district of Belonia, along with the border trade, the ancient trade is booming in the hands of the BSF. One of them is a nine-month-old baby and two are minors. According to the details of the incident, eleven persons tried to cross the border from Bangladesh and enter India. Two of them managed to escape. The BSF arrested nine Bangladeshis and handed them over to the police of Balonia police station.

More surprising is the fact that one of them is Rabia Begum, a Hindi speaker and she claims to be an Indian. Belonia Police Station OC Smriti Kant Vardhan told the media that the nine Bangladeshis detained on Friday will be taken to Belonia court. The detainees are Rakman Biswas, Lipon Lashkar, Sameer Hossain, MD Sameer Khan, Rabia Begum, Rukia Sardar, Nur Mohammad, Mithila Runa Akhtar, Rezia Begum.