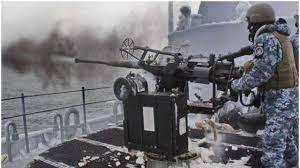 A medical student who returned to her home in Madhya Pradesh’s Guna district from has made shocking claims. The student has said that Ukrainian guards were beating up Indian students who were fleeing the war zone.

The statement from Shruti Nayak, a third year MBBS student at Ivano National Medical University, comes a few days after videos of a purported security officer hitting a student had gone viral.

The situation in Ukraine is very bad, she told reporters. “Ukrainian guards were harassing Indian students who were fleeing the war zone and even beating them up,” she claimed. “I am fortunate enough that I reached India and now meeting family members,” she said. Nayak had booked a return ticket for February 16, but the flight was cancelled.

She then booked a ticket for March 3, but it too got cancelled, she said. Nayak then traveled 400 km on a bus to reach Romania on February 26 and the government there helped Indian students, she said, while also thanking the Indian government. She boarded a special Air India flight for evacuees on February 27 from Romania and reached New Delhi at 6.30 pm IST the same day.

Madhya Pradesh Chief Minister Shivraj Singh Chouhan had said earlier that more than 180 students stuck in Ukraine contacted a helpline set up by the state government. So far, 29 persons from Madhya Pradesh have returned from Ukraine, Chouhan stated on Monday night.