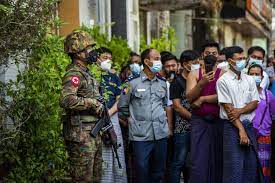 Dao Thida Pioni, a schoolteacher from Myanmar, had just woken up in the morning, when the sound of four soldiers’ boots came out. Dao Thida came out hearing a knock on the door; His electricity bill was outstanding. The soldiers told her to go to the government electricity office quickly and pay the bill.

At once one of the soldiers pointed a gun at him and said, “If you value money more than your own life, don’t pay the bill!” Hearing this, the teacher rushed to the electricity office in her home clothes and paid the bill. Myanmar’s military seized control of the country on February 1 last year in a military coup. Since then, Myanmar has resigned in protest of military rule Countless people. They have also stopped paying electricity bills as part of a non-cooperation movement to deprive the military junta of revenue. But experts have expressed doubts about whether these public initiatives could bring down the military regime.

But eleven months after the military coup, Myanmar’s military is so desperate for money that it is now acting as a creditor. Myanmar residents say that over the past few weeks, soldiers in various cities, including Yangon and Mandalay, have been coming to people’s doorsteps with power department workers to collect bills.